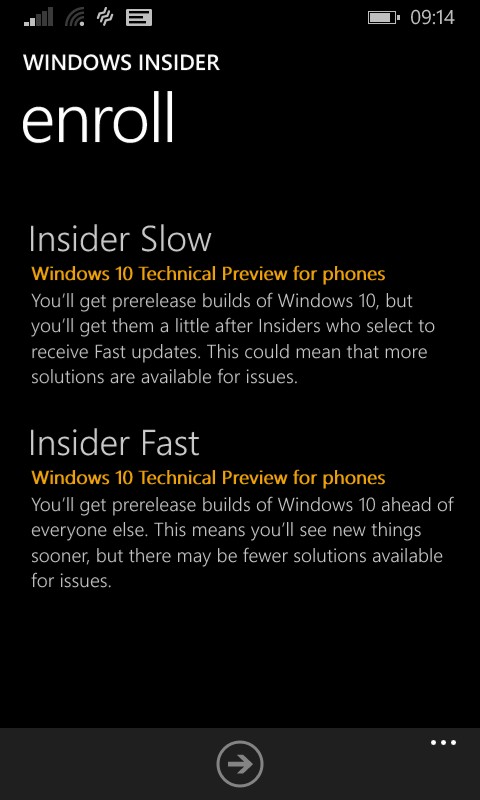 You have decided already to join the insider programme even despite knowing things such as: “if you share internet through tethering and you turn off the phone then WiFi might stop working” (according to the warnings given by Microsoft).

On top of that and, just in case you haven't read the warnings from the website, you get a warning asking you yet again whether you would like to get the updates even faster shortly after they are created or just slightly slower after someone already had issues with them. A question might just suddenly appear: is there an extra risk? or what is advisable?

From my point of view it would mainly depend on two things: the model of your phone and how willing you are to have windows re-installed if something goes wrong.

Windows 10 for phones seems to have been designed initially for recent and popular models with enough memory to allow the basics to be installed without much hassle.

On the other hand, popular low budget models, such as the Lumia 520, have been on the waiting list until Microsoft found a way to allow those models to have Windows 10 installed, still, “popularity” is something important that might tend to push Microsoft a little bit to release bug fixes for those phones at some point after tests have been done in more recent models.

The decision is very personal and it depends on the person and their particular circumstances but based on comments, reports and the different kind of people using the Lumia phones we might find the following situations:

I have another phone and Windows Phone is my second phone

As a person in this situation your Windows Phone would be your second device, you are keen to try new things, you would survive not having a feature that suppose to be available but still you don't want to have to install windows every time an update goes wrong.
Option suggested: Insider Slow

As a person in this situation your Windows Phone would be just a device that you might be using for development, you don't really depend on it and you want to be the first to know what features are there available.
Option suggested: Insider Fast

As a person in this situation your Windows Phone is the phone you have given everyone and the one used to receive phone calls. You can't afford having this phone broken but still you want to see the upcoming features in Windows 10 for phones.
Option suggested: Insider Slow

UPDATE 11/APR/2015 12.30 GMT: at this stage, as the build 10051 is the first release available to an important number of phones, selecting “Insider Slow” won't make the update available. If you want to install this first version of Windows 10 Technical preview for phones please select “Insider Fast” and then go to settings and click “check for udpates”.

UPDATE 11/APR/2015 23.14 GMT: Some models are presenting a problem in which the SIM card is not detected and a “no sim card” message will be shown. It is advisable to avoid upgrading to Windows 10 for those models that are not detecting the SIM card at least until the problem is solved. More details here

Certainly there are more circumstances but the main idea is not to take the risk of fast updates when the phone model is not too popular or when there's a history of previous problems with that model in particular.

What would you choose?