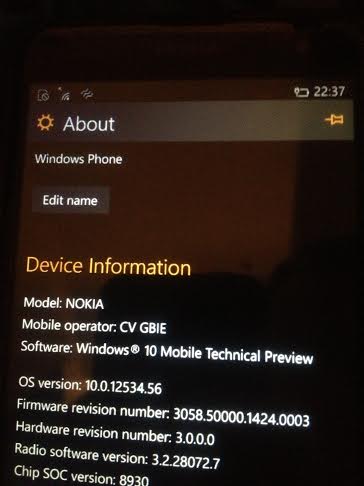 There are some things out of place, the tiles were rearranged and certain important things are clearly not working.

Please, find below a list and a warning about some Lumia models that shouldn't update to Windows 10 Technical preview for phones until a new update is available.

Models that are presenting the “No SIM card detected” problem

We have installed and checked that after installing Windows 10 technical preview for different Lumia models and sometimes the SIM card stopped being detected and some others it is never detected.

The lumia phones that are confirmed to present this problem so far are the following:

(We will keep updating the list as we find out)

Advice: please, do not sign as an “Insider Fast” if you own some of those models until a new update is made available.

We wanted to share this so that others don't have to go through the pain of having their phones every day without a sim card or at least without the sim card being detected by Windows 10 Technical Preview for phones.

How to solve the problem

UPDATE 13/APR/2015 23.00 GMT: New detailed instructions to solve the no sim card problem and go back to a working Windows 10 Technical Preview for Phones but WARNING: the contacts, text messages and previously saved WiFi password might get lost on the way!

We are currently waiting for a new update or a workaround that is not too radical but in the meantime, as suggested by Петър Маринов in the comments (thanks!), going to Settings > System > About > Reset my device in Windows 10 for Phones will reset your phone to its factory settings.

As it can be seen, the location has changed a bit in Windows 10 for phones but the full instructions from Microsoft for Windows Phone 8.1 are here.

So far, for us, a soft reset didn't solve the problem.

Please, check back during the upcoming days to see what options are available.

Have you had the same problem with the Windows 10 technical preview update?

« Windows 10 technical preview for phones: Insider Slow or Insider Fast?
How to solve the “no SIM card” problem in Windows 10 Technical Preview »