Microsoft has announced Windows 10 (and not Windows 9!) 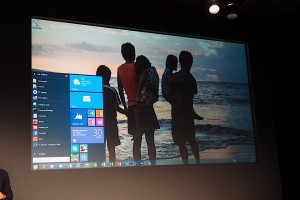 Today Microsoft has released Windows 10 Technical Preview which intends to be the universal Operating System for Mobile devices, xbox and computers.

According to Netmarket Share most PC users are currently running Windows 7 so Windows 10 attempts to remind us of Windows 7 by having a “Start Menu” that in addition will be resizeable and customisable.

Microsoft also revealed that Windows 10 will work differently depending on the device it is running on and for laptops with touch screen users will be able to move “live tiles” across the screen by touching at it. So, it should ideally be comfortable to use not only for those using a mouse but also for the finger presses in a Surface tablet.

Microsoft provides some information about how to download the Windows 10 technical preview and see the new features highlighting the fact that the start menu is back and so it is the search box.